So it just so happens that this year International Beer Day and my Birthday have fallen on exactly the same day! I couldn’t pass up the chance to do a blog today!

For this blog, I’ve cracked open two Buxton Beers that have just been begging to be reviewed, King Slayer and King Maker. Beautiful cans, both DIPAs, both a pretty sizeable percentage! Let’s see which comes out on top!]

I resisted the temptation to make Game of Thrones references in the intro put it goes out the window here (#spoilers). If Jamie Lannister is King Slayer, then by the end of the series you can probably put his brother Tyrion down as King Maker. I highly doubt this was intentional when Buxton were brewing these, but I think it’s a fun little story to add to these two beers!

The instant I cracked this can open it flooded the immediate vicinity with a huge hoppy aroma which definitely appeals to me. It poured with a lovely deep golden colour and minimal head, though obviously that’ll vary person to person. 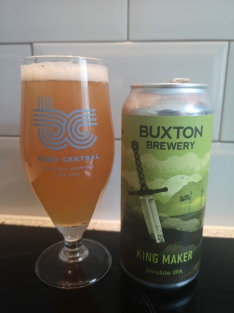 Then we come to the initial taste, which is a very boozy and spicy kick with a syrupy mouthfeel. Really intense bitterness right at the beginning, and that then flows into a delicate sweetness with both those key flavours lingering long after you’ve finished a swig.

A word on the can design of both of these – stunning. I absolutely love it when a brewery comes up with a great ‘hook’ like this one, and they’ve pulled it off brilliantly.

Andy’s Take – A tremendously boozy and bitter DIPA which stays it’s hand from overloading on the fruit, and that gives it a much more memorable flavour profile than some other DIPAs I’ve tasted. Untappd score of 4.25 for me!

So now we come to the King Slayer. With this one the aroma was far less punchy and in your face, and had more sweet caramel notes to it than pure hoppiness. 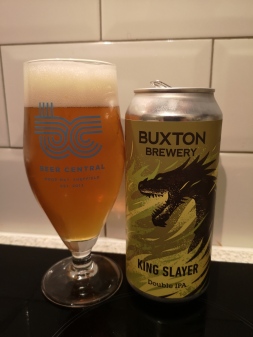 The initial taste as well contains a lot of caramel which outweighs but doesn’t overwhelm the natural hoppiness of the beer. There’s a lot of sweetness there that lends to an even more syrupy mouthfeel than King Maker.

Andy’s Take – This is so different to the King Maker that it’s very difficult to compare the two. It’s a testament to Buxton Brewery that two beers of exactly the same ‘style’ can be so unique. This one slightly tops it for me, with a delicious caramel mouthfeel and sweet yet bitter finish.

So in real life the King Slayer beats the King Maker, but overall these are two fantastic beers from a brewery that keeps getting it right time after time, this is definitely one of my favourite ‘hooks’ from a brewery so far. Till next time, Cheers!