Hello and a big welcome to the first edition of Hutch’s Craft Beer Club!

This blog will be all about the reviews and thoughts of me and a group of friends as we sample a wide variety of different craft beer from Sheffield, the UK and beyond! It’s a work in progress so if you have any ideas on how to improve this blog then please give me a shout!

Disclaimer – Even if we give a beer a low rating that doesn’t necessarily mean its a bad beer. All these reviews are done spur of the moment on one evening and we try to be as objective as possible. Don’t take our word as gospel, go out there and try new and exciting beers yourself!

We kick off with a gentle session IPA from Buxton Brewery. In retrospect, we all seem to agree we need to give this one another chance as even though no one rated it terribly, we were all perhaps a tad harsh on it with it being Beer 1! 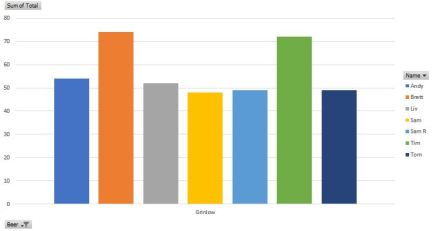 Brett declined to give ratings for each individual category, rather going for a descriptive answer and a gut reaction score out of 100 – an example of this is his ‘score’ for drinkability – “I would drink”

Overall it seems that drinkability has let it down, whereas it started off quite promisingly with a good score in smell. Solid if uninspiring scores but Brett and Tim both put it in the ‘Great Beer’ category.

Andy’s Take – A decent enough session beer that starts off great on the nose but lacks enough substance to be memorable. Could have done with being a tad less bitter, but would probably drink it again.

Next on the list is Robots Vs Clowns, an IPL (which doesn’t stand for Indian Premier League as suggested on the night!). It was brewed in collaboration with Gigantic (of Portland, Oregon) and is the first of several collaborations we tried this time. 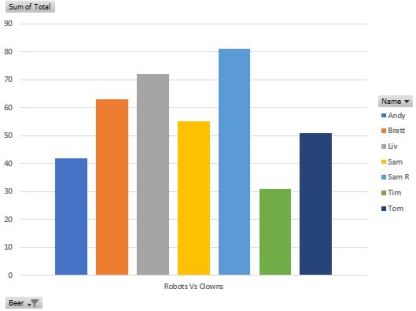 Brett’s nugget of wisdom for this beer comes from his score for smell ‘Malty Hob-nob’ – I hope they put that on the packaging!

This was a much more divisive beer with a lower average than Grinlow (56.4) putting it firmly in the ‘Middle of the road’ category. Interesting to see the difference in the lowest (Tim’s) and highest (Sam R’s) scores is a whopping 50 points! 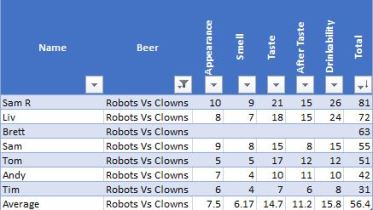 Looking at the summary of scores illustrates just how divisive it was! You would probably have to say appearance was its most successful area but almost every average is hovering at not far off 50%. Chalk this one up to ‘must do better’ for Magic Rock.

Andy’s Take – Always difficult to criticize a collab as they are meant to try new things and will often fail because of that, but my gut reaction to this was it didn’t taste nearly as good as I expect from Magic Rock. Perfectly drinkable but nothing special.

A beer brought by Tim after his trip to the Cloudwater brewery and we were all very excited to try this! The results were… interesting! Another collaboration this time on a sour mixed-fermentation beer between Cloudwater and Jester King. 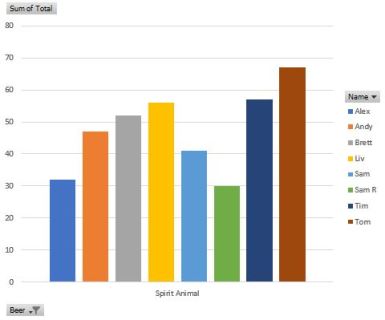 I’m sure by now you are starting to get a feel for how Brett reviews his beers, literally whatever comes into his head first! For this one we look at taste – “Dentist’s mouth cleaner”. Make of that what you will!

Again we have a pretty divisive beer but not quite as divisive as Robots Vs Clowns with a difference between high and low of 37 points. The majority of people seem to rate this as a decent beer.

Clearly this one was not a winner! It performed particularly poorly in smell (I wont repeat some of the opinions!) and taste. A relatively respectable appearance score as well especially when you take away the anomalous ‘2’ that Liv gave it! This beer saw Alex join us, and clearly he didn’t enjoy his starting beer!

Andy’s Take – Not much I can say about this one that isn’t described in the table above, but having given this a 47 it falls just below my ‘decent beer’ category and into the ‘wouldn’t drink again’ zone. For someone who likes this kind of beer it was nowhere near what I expect, especially from Cloudwater.

On a personal level, the beer I was looking forward to more than any of the others. Having been an ardent Trappist beer fan since i was 17, to finally see one brewed in the U.K was a very exciting proposition. Lets see if it turned out better than the first three…

We may have reached the point in the evening where Brett began to lose his mind, when describing its appearance – “Aaaaah Black & Cloudy”, hopefully that’s a good thing?!

Huzzah!! A good beer well liked by (nearly) all of the crew! 4 scores over 70 and one over 80 put this firmly in the ‘Great Beer’ category. You may be starting to see the pattern that Tom is quite genorous! Liv is the outlier on this one but then again when a primary trappist saying is ‘Beer should be liquid bread, not water’ you can see why some might not enjoy! 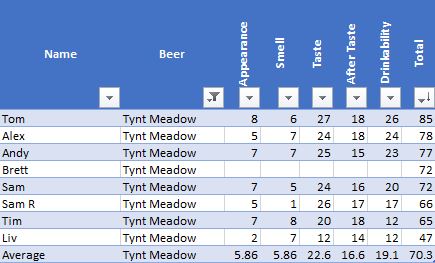 The scores on the doors look very promising for Tynt Meadow. With an average score in Appearance and Smell it was a rocky start, but with an average 22.6 on Taste and 16.6 on Aftertaste its clearly got it where it counts kid. Still a significant difference between top and bottom with 38 points between Tom and Liv.

Andy’s Take – The wait for a U.K Trappist beer was worth it, it’s a fab beer. Malty, sweet and hides the punch it packs very well. Couldn’t drink a huge amount of them in one, but the ones you do drink will be very memorable.

The fact that this was no-one’s favorite should clue you in on the quality of beers yet to come, but for now you’ll have to wait until the next installment (hopefully next week)! In the meantime, the table for the evening looks like this;

Hope to see you next time, Cheers!

One thought on “The First Meeting – Part 1”